There’s a line in an old Robert Heinlein book, in which the main character muses about the perfections of female humans, and then adds, “No doubt a gentleman warthog feels the same way about a lady warthog. But if so, both of us are very sincere.”

I can now personally attest to the accuracy of this statement. Just as we arrived at my new accommodation at Old Drift Lodge, what did we see but a whole group of warthogs, resting together right outside the front door. One lady warthog stood nursing one of the several little hoglets who surrounded her… and a gentleman warthog cuddled close beside her, tenderly licking her face. They were adorably sweet together, the whole little family of them.

That was my welcome to Old Drift, a safari camp just outside of Victoria Falls but in a different world. It’s actually inside the wildlife preserve, and right up against the river — my deck overlooks the water, with the Zambian shore directly opposite. It’s a serene and beautiful place.

It’s also greater luxury than I ever expected to be able to afford in my lifetime. I didn’t pay for this place; I paid for a much more modest camp owned by the same company, who sensibly cover a wide range of price points. But with only a few total guests spread out across multiple camps, the management wanted to consolidate so they wouldn’t have to keep all the camps open and staffed for just one or two guests. So they offered me a free upgrade to Old Drift, in order to get us all into the same place. There’s still only a few of us here, even after we were all corraled into the same camp, so I can see why they wanted to do it. In any case, I’m not going to look a gift horse in the mouth. It’s a very similar situation to what happened a couple days ago with the helicopter ride: consolidation means I get an upgrade. I wonder how often that’ll happen this trip? It’s nice, certainly… but I worry about the tourism industry here. It was just beginning to bounce back from the pandemic when Omicron made everybody afraid of Africa.

Most people cancelled. If you’ve been reading along, you know how very close I came to doing likewise. I’m so very glad I didn’t.

My room at Old Drift has a private deck, with a plunge pool just for me as well as an outdoor shower and the crowning glory for a bathtub-loving traveler: a big outdoor claw-footed tub. I tried it almost immediately — not so much because it was the first thing that interested me, as because the stretch between lunch and evening was the longest unoccupied time I’m likely to have at this lodge; they’re keeping me busy! –but sadly, we had a very windy afternoon. I found myself wrestling constantly with the canvas privacy curtains, which were blowing right into the tub with me. When one of them blew away entirely, vanishing I knew not where, I gave up and went inside to read.

I found a crocodile on my bed. Made of towels, with little green leaves along its back, as the bony scutes that constitute croc armor. I laughed and laughed, and then carefully removed the crocodile to a safe place on the desk. Since there are plenty of other towels, my crocodile will remain intact for as long as I stay here.

In the evening, we went on what was supposed to be a sunset river cruise. The sunset was hidden behind clouds, but we still had a good time, and only got rained on a little bit. I admit that I was much happier during the second half of the cruise, while we were sailing upstream, than I was for the first half… our guide Musa and the other guest (a very nice gentleman from Scotland, with roots in South Africa) laughed at me for how nervous I was on the way downstream, but I kept remembering those 500-foot crashing falls, waiting for us in that direction. We never actually got closer than a couple of kilometers to the Falls, though we could see the rising mist even from that far away. Musa told us that David Livingstone had seen the mist from a similar point on the river, and at first believed it to be smoke from a massive fire. When he was taken to a vantage point on one of the nearest islands and shown what the Falls really were, he was overwhelmed, describing it as the kind of scene that angels must see when they fly.

There are definitely mixed feelings about Livingstone in Africa these days, but according to Musa he is still largely regarded with affection, unlike many of the other European colonist-explorers. Zimbabwe itself, for example, used to be named Rhodesia, after Cecil Rhodes… and the Black population threw out the name so hard it bounced, as soon as they were free to choose. But the city of Livingstone, right across the river from us on the Zambia side of Victoria Falls, has kept its name since Zambian independence.

Mostly, on the cruise, I watched for hippos, of which there were plenty. Musa explained that the males usually pop their heads up whenever a boat goes by, to make sure it isn’t another male hippo intruding on their territory. We saw a few small clusters, and one giant pod of perhaps twenty hippos together. The other guest with us was a knowledgeable and avid birder. He spotted everything from Great Egrets (a beautiful white bird that we got to watch hunting) to several different types of vultures sitting together in a grove of trees. Musa also told us about the politics of the river — how they determined which parts belonged to Zimbabwe and which parts to Zambia, (not to mention four or five other countries upstream), how Zambia and Zimbabwe agreed on boating rights for each country in each other’s areas, and how the water rights were allocated among the several nations with a stake in the Zambezi. It’s all done by complex international agreement. I wish the United States had ever had to get along with a group of neighbors like this. We don’t have many, and we either ignore those or try to push them around. Because we’re big and militaristic and we have a huge range of internal resources, we can get away with it. It’s not good for them or for us.

After the cruise, I went to get ready for dinner and remembered that blown-away curtain. I figured I should probably go try to see where it had gone, so I stepped out onto the deck. I had just spotted the curtain, wadded up under the tub, when I heard a series of grunts that I’ve only heard before on nature videos, but which made my hair stand on end. The sound screamed to my hindbrain HIPPO. I looked around wildly but failed to see the creature, even though it was so close I could not only hear the grunts, I could hear the animal breathing between them. I just about jumped out of my skin and scurried indoors.

I asked about it later, over dinner. After all, I wasn’t sure it was a hippo. I’m no wildlife expert; for all I knew, it could’ve been one of the warthogs from earlier that day.

No, the others told me. It’s definitely a hippo. The other guest had heard it the same time as I did, and knew what they sounded like. And when I asked the staff, they told me casually, “Oh yes, there’s a female who lives just beneath your deck. Only at night… in the day she goes into the water.”

There’s a hippo living under my deck? Okay then.

I have been assured that I have nothing to fear. The hippo never comes up onto the deck, they tell me. Nevertheless, I think I will confine my use of the deck space to the daytime from now on. I would love to see that hippo, and will definitely be looking for her through the glass in the evenings, but I would prefer that we not startle each other from close range. 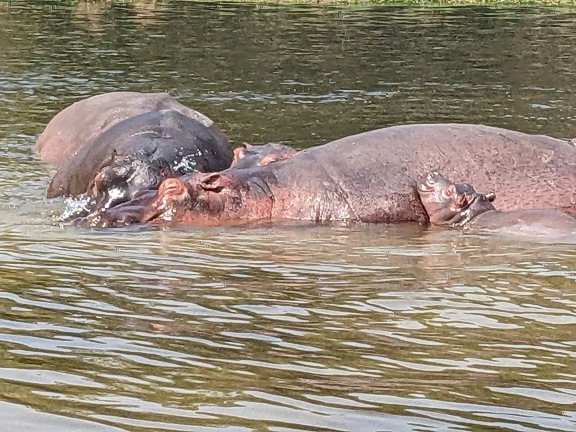 We hit the road at six thirty on our first full day at Murchison Falls.
END_OF_DOCUMENT_TOKEN_TO_BE_REPLACED 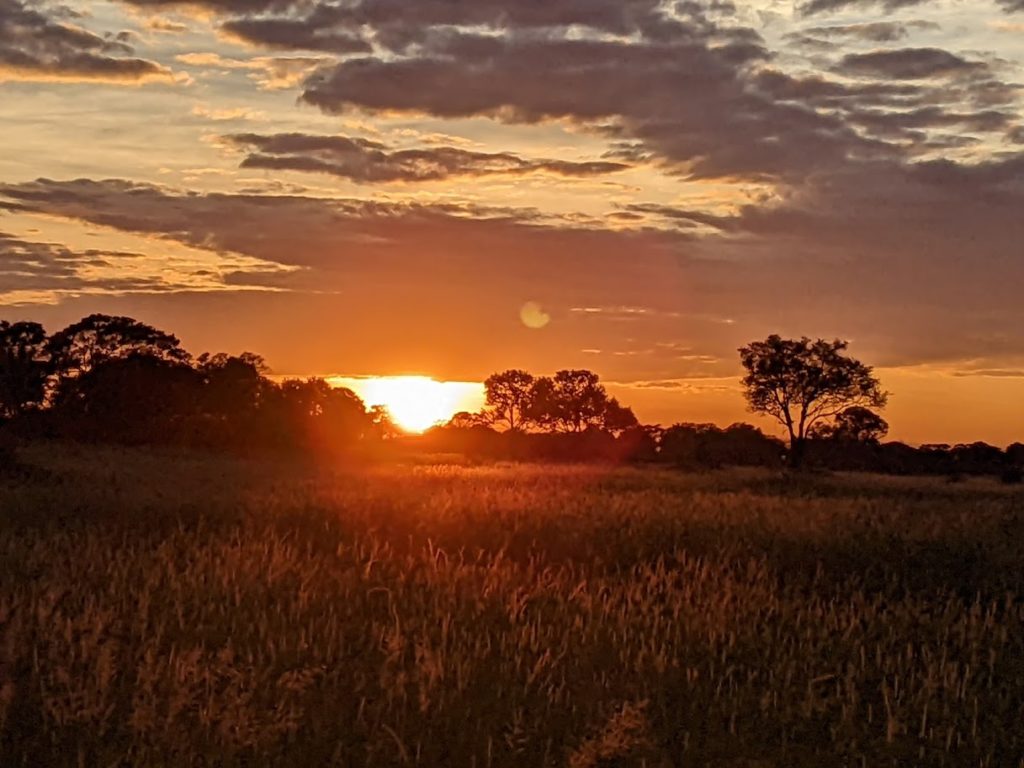 Trip Diary: How to Dodge a Hippo

Sunrise in the Delta
END_OF_DOCUMENT_TOKEN_TO_BE_REPLACED 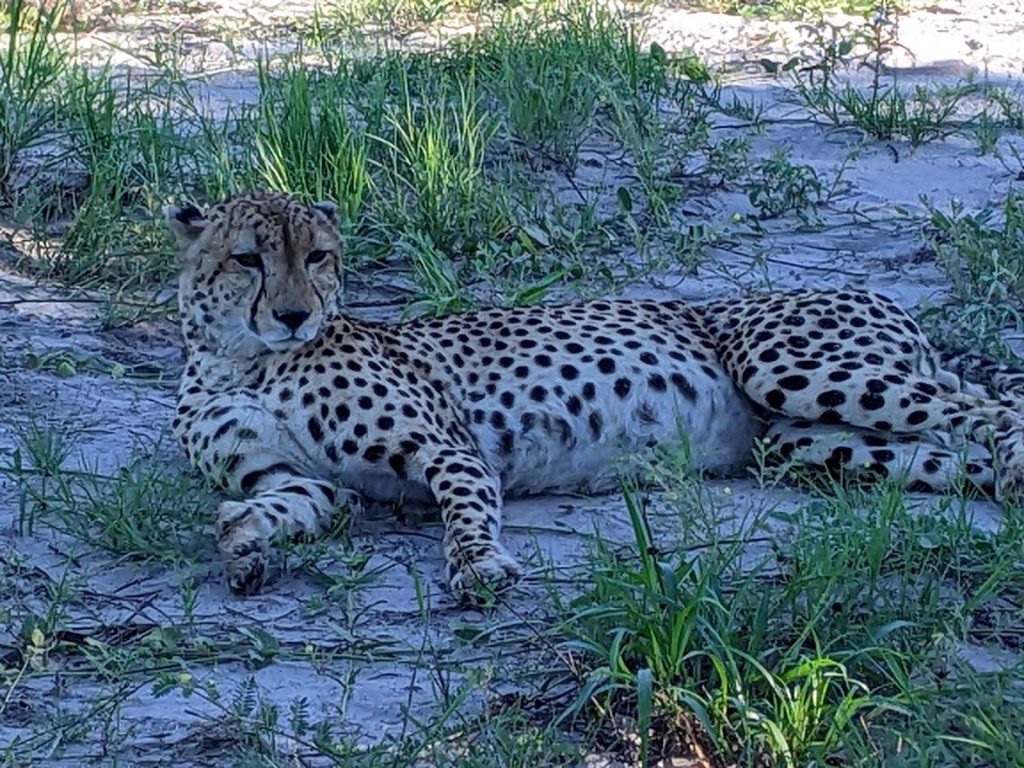 Meals at Splash Camp are timed around the game drives: breakfast at 5:30am, brunch at 11:30am when you return fro...
END_OF_DOCUMENT_TOKEN_TO_BE_REPLACED 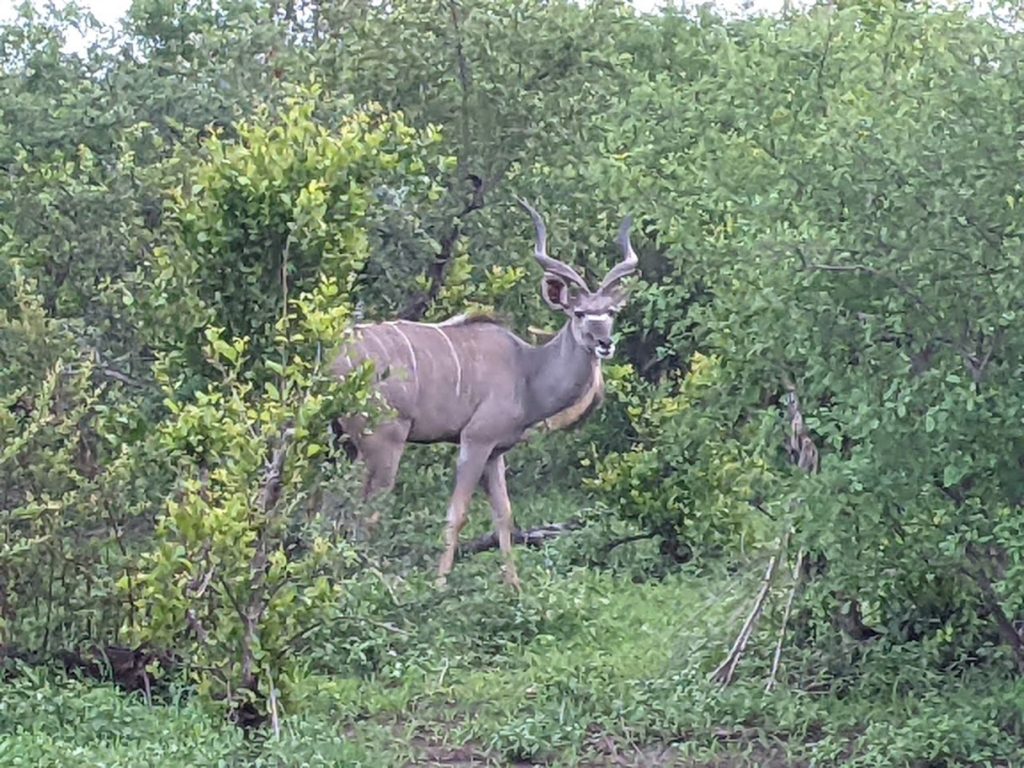 Trip Diary: Where Are All the Elephants?

The Lookout Cafe is the centerpiece of Wild Horizons’ empire of Victoria Falls tourist attractions. It’s a restaurant, but that’s a little bit like saying that Broadway-caliber dinner theater is a restaurant. At the Lookout Cafe, lunch is respectable, but it’s really all about the view.

END_OF_DOCUMENT_TOKEN_TO_BE_REPLACED 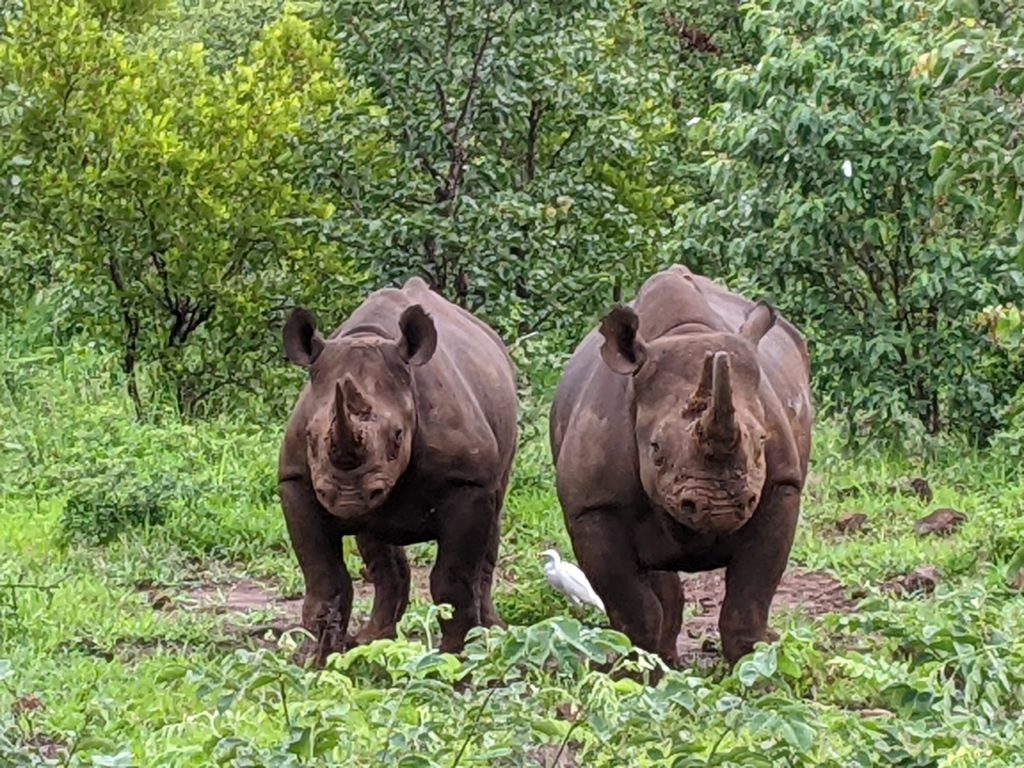 When I was very small, my father used to sing silly things to me, as many parents of small children do. One of his favorites was to sing the words “Heffalumps and Woozles,” from out of the Winnie the Pooh books, to the tune of “Politics and Poker,” from the Broadway musical “Fiorello!” I now understand the compulsion. All day today, I’ve been singing “Crocodiles and Rhinos” to myself, using the same tune.

END_OF_DOCUMENT_TOKEN_TO_BE_REPLACED 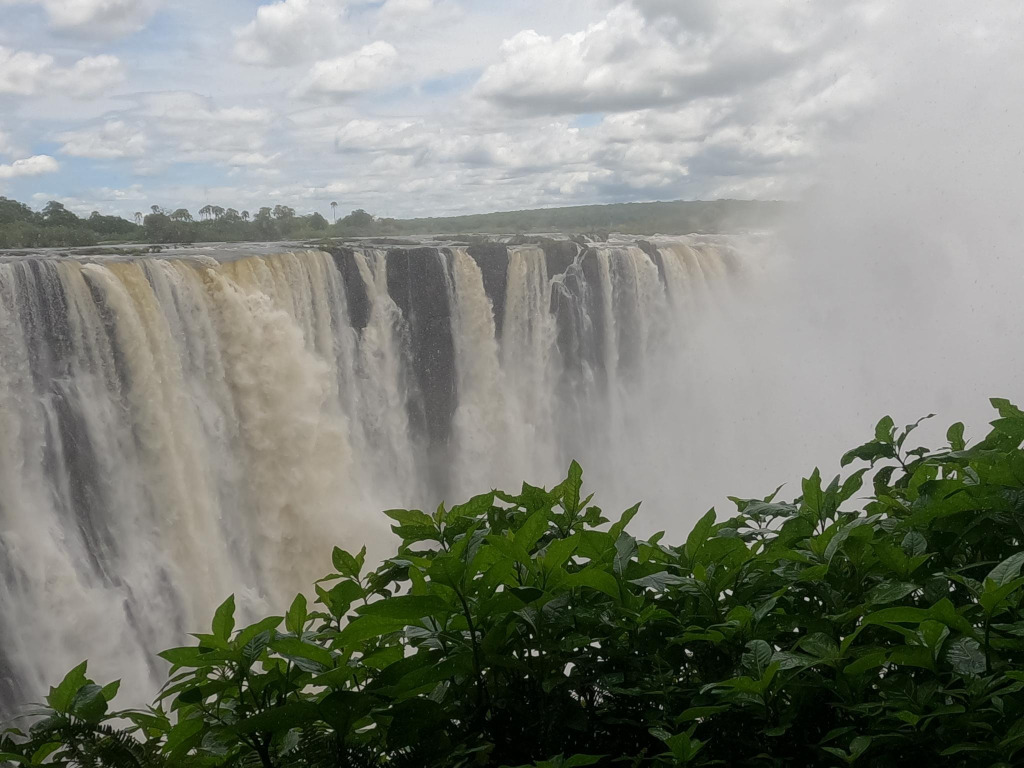 The bags were right there when I got back to the airport. I've never had such an easy time dealing with an admini...
END_OF_DOCUMENT_TOKEN_TO_BE_REPLACED